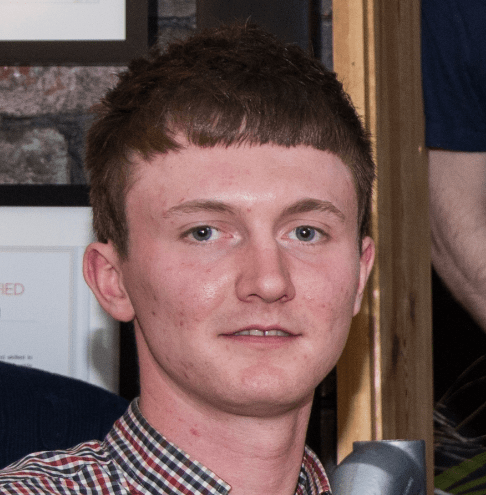 Has the crest of the wave broken? Are your numbers down and your staff frustrated? Part of being a great recruiter is knowing when to experiment.

According to Recruitment.co.uk, these sectors saw limited growth in 2017;

Depressing? We know. Thousands of recruitment firms across the UK have to share these tiny percentages. It doesn't leave much room for growth when plenty of bigger firms will gobble a majority stake.

Here are the sectors that performed best in 2017;

We hear you. Industries that perform well one year might stagnate in the following year. It's important to be on the ball.

Want A Sure Bet? Invest in Tech.

Technology is the fastest growing industry in the UK, the facts speak for themselves.

Europe's leader, the UK has attracted £28 billion pounds worth of investment since 2011. France trail with £11bn and Germany with £9.3bn.

Facebook are building new HQ in London which will create 500 new jobs. Google plans to create 3000 new jobs at their new London HQ in 2020.

"The number of digital tech jobs across the UK has grown at more than twice the rate of non-digital tech sectors" - Theresa May.

The government are desperate for digital, data and tech workers as Brexit looms.

Over 300 workstreams have been identified. The government need to ensure jobs are available and the salaries are competitive.

Tech salaries are 44% higher than the national average salary, which is a great pulling point for potential candidates.

It's already working according to recruitment firm Reed, who saw a 12% increase in job posts in 2017. There was a 9% increase in Java Developers and a 6% increase in Network Engineers.

Companies are stepping up efforts in the talent race and salaries are increasing.

There will be a change in the way recruiters approach candidates, tech is often grouped into 'IT' which is insulting considering the broad scope of roles in the sector.

Recruiters like talent.io take away the 'middleman' frustration. They allow employers to contact employees after a screening process that whittles them down from 300 to 40.

What About Using Tech in Recruitment?

Technology is taking over the world and it's frustrating and brilliant to watch.

Some clients have complained about the lack of human interaction with recruiters. Annoyed by automated emails and Skype calls.

Recruiters need to know what works for each individual or business. The beauty of human nature is that everyone is different.

You should use common sense with technology. Indeed say 62% of people apply for jobs on a mobile device. Do you have an optimised mobile site? You better find a good website designer then!

Take a look at this ‘generic recruitment video’ by Fiverr, it’s fun, ironic and different by being the same.

The digital boom has shifted how marketers and media professionals display products.

These changes have been embraced by one of the fastest growing sectors in the UK.

The PwC predict internet ad spend revenues will surpass £10bn for the first time this year.

There's a demand for digital marketers who specialise in PPC, SEO, copywriting, content writing, analysis and many more roles.

Demand outweighs supply in the digital marketing and creative sector. Employees tend to be happy in their roles but there is still potential for hires.

VR is one of the fastest growing industries in the UK and is set to increase by 76% in the next five years to £801 million pounds.

It's thought there'll be over £16 million headsets in use by that date, compatible with £12 million portable smartphone devices.

Dedicated home headsets will account for £3 million and £1 million will be self-contained devices.

VR gives recruitment companies the chance to stand out. Jaguar Land Rover created a gaming app where candidates enter a virtual garage and play various games to test their aptitude.

Other ideas include giving virtual office tours or putting candidates in real life office situations to see how they perform.

The UK has Europe's largest gaming market and the fifth largest in the world.

A major factor is the availability of games. Half the nation pick up a smartphone, handheld gaming device or console and play a game.

In January 2017 Indeed reported a steady decline in game industry jobs since 2014. There's been a 64% decrease in ad postings and a 50% increase in applications.

The supply chain seems to be waning, experts put this down to big game production companies monopolising the market.

Plenty of marketing experts and tech industry leaders have dubbed 2018 the year of video, and rightly so. It’s one of the biggest growth industries in the UK. Here are some stats for 2018:

Don't forget to use video as part of your recruitment strategy. Introduce your CEO on your homepage or create how-to videos for candidates.

UK manufacturing output is at its highest rate since 2008 after an 8 month growth spurt, making it one of the fastest growing sectors in the UK. 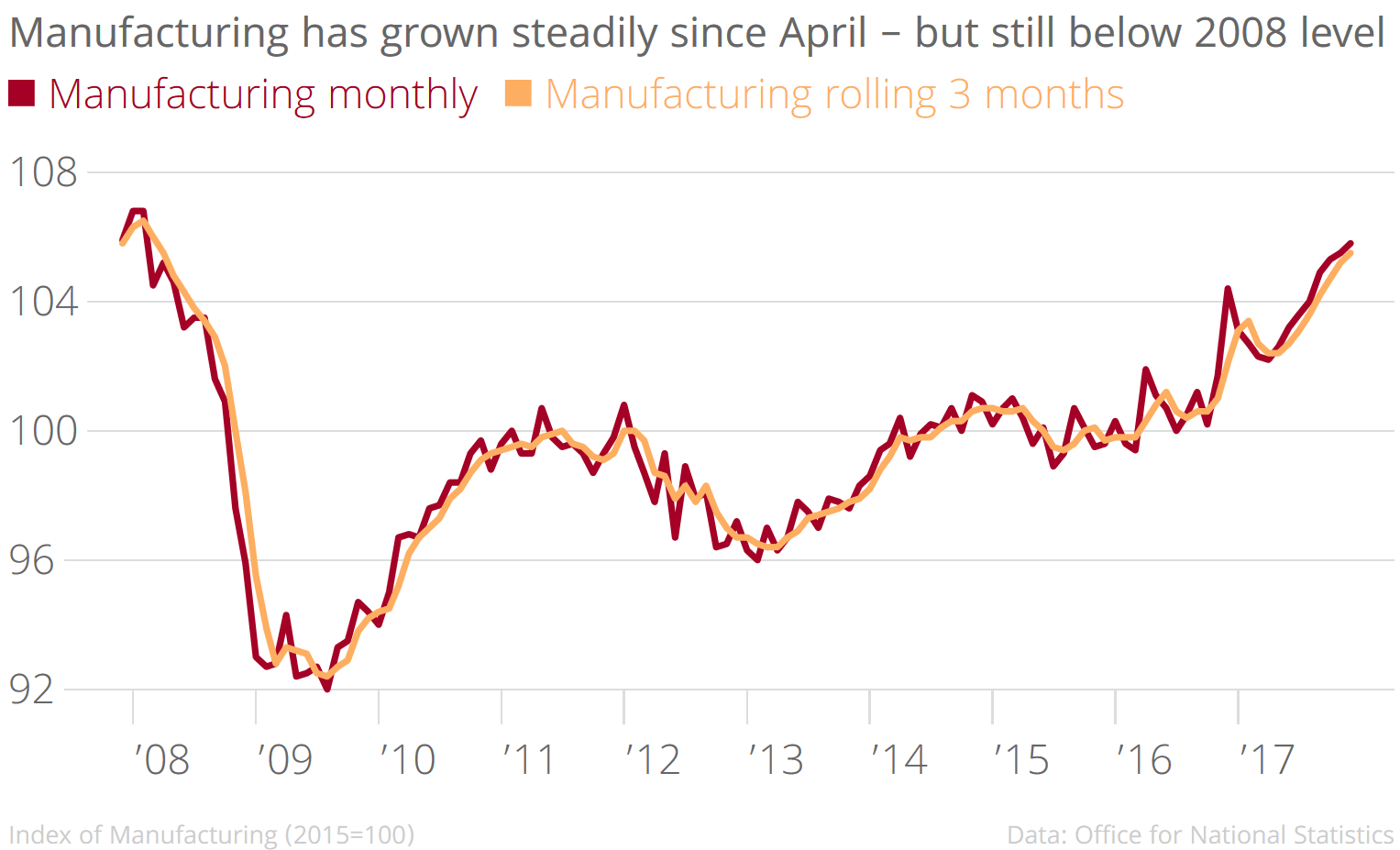 Renewable energy, cars, boats and aeroplane output are the main contributing industries, with 3.9% output increase between them.

Manufacturing PMI remained high towards the end of 2017, with an average of 57 in the last 3 months of the year. This is due to a fall in the value of the pound, promoting increased export orders for overseas firms.

The (Purchasing Managers Index) measures the health of the industry and bases its score (0-100) on employment factors, orders and inventory levels. Anything above 50 is growth.

Import costs have risen and there is speculation over whether this growth spurt will continue after Brexit.

Car manufacturing growth is down by 3%, but we’re seeing the highest sustained growth period for over 20 years.

Order books are filling up and 54% said they're increasing production. A survey conducted by the Confederation of British Industry says 51% are increasing staff numbers in 2018.

As supply becomes tight and companies look to fill specialist roles they’ll look for specialist recruiters. If you have a wide range of industry knowledge you’re more likely to be contacted.

Manufacturers need to appeal to a younger market and employer branding is crucial. Why would they want to work for that company? Do they have a big social media following? Do they offer a great company care package?

Good and bad news travels fast, so companies need to make sure candidates are shouting the former.

Two years ago the government promised to build one million homes by 2020. In the 2016-17 calendar year they built 217,350 homes, which puts them on track to achieve that target.

It's this pledge that has contributed to industry growth. September saw a dip and it rose out of the recession at 52.2 PMI in December.

Brexit has contributed to the fall in commercial development as many firms rely on overseas trade and are reluctant to invest. With a deal agreed, this could spark improvement.

From these numbers, we can assume more firms will be looking for housing construction employees. Civil engineering jobs will stay the same and commercial sector jobs may stagnate or decrease.

It's important to consider conflicting factors. The implosion of Carillion has had a negative effect on the industry and fears of a 'domino effect' are worrying for businesses.

The January PMI came in at 50.2, 2% above industry contraction. Analysts worry that the end to free movement in the UK could start a skills shortage in the industry.

Whilst the construction industry is in flux it's difficult to predict what 2018 holds. It may not be one of the fastest growing industries, but there’s potential.

You'll have noticed we mention Brexit a lot in this article, and that's for a good reason.

We think the uncertainty of the Brexit deal outcome and reluctance of businesses to invest will see many of them seek financial help.

47% of MPs think Brexit will have a positive impact on the industry as businesses seek financial security.

This growth will see further job opportunities as firms try to cope with the demand.

They'll look for tech-skilled employees like data analysts who are proficient with data analysis tools.

Accountancy firms appreciate they must shake the 'boring' stigma and will offer lucrative packages for better employee retention.

No sector offers a 100% guarantee and different industries offer different benefits, obstacles and pitfalls that you'll have to navigate throughout the year. Good luck and happy headhunting!